Drones are an increasing problem, cluttering the skies, poking their noses where they shouldn’t be, and getting up to all kinds of mischief. Dutch police have gone back to nature in trying to solve this problem: eagles.

Drones are now readily available to the public (and let’s face it, they’re pretty cool). My fiance even has one. I mean, it’s tiny and the battery only lasts about 10 minutes, but still. They’re proliferating. And when they’re getting too close to airports and flight-paths, measures need to be taken to protect the more important objects hurtling through the air – you know, the ones carrying people.

There is technology that “detects radio signals from rogue drones and uses tracking technology to force the drone to land,” which is pretty cool, even though it’s only in the research stage. But we all know as software improves, some drones will become impervious to that.

CNN lists some other countermeasures:

Countermeasures cited in the report included signal jamming, lasers, and the deployment of missiles, rockets and bullets, where it’s acknowledged there is high risk of collateral damage, and potential for “catastrophic damage” if they miss their target.

But eagles are pretty awesome. Let’s hear it for more eagles. Because what could possibly go wrong?

Have you ever noticed how things built today don’t seem to last like things built “yesterday?” Seriously, look at some of the structures built in ancient times: Stonehenge comes to mind, as well as the Coliseum in Rome and castles across Europe. Then you look at buildings today and how quickly they seem to deteriorate. True, we’re trying to build faster and cheaper, trying to be more efficient with our resources. Maybe the things we’re building don’t need to last that long.

But maybe we’re just waiting for the technology we need to come along. Like self-healing concrete. IFLS wrote an article called Self-Healing Concrete Repairs Its Own Cracks. 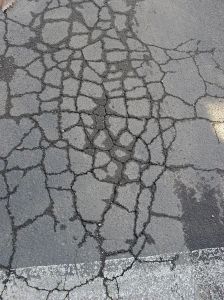 No more navigating this minefield to avoid “breaking your mother’s back.”

Even cooler, these bacteria can lie dormant for centuries until needed. Now there’s an insurance policy that’ll keep you covered.

For more details, check out IFLS’s article above. The technology is a little expensive right now, but scientists are seeking to develop cheaper options without compromising the effectiveness.

What do you think, readers? Is this cool or what?

Good news, everybody! After the surface of the earth has been reduced to a toxic wasteland, these guys will have a way to create scenic nature areas underground. (For those of us who hate how blah and dirty post-apocalyptic refuges are in movies and whatnot, this is excellent news.) The Lowline project seeks to redirect solar energy from the sunlight above on the streets to their underground park, a former trolley terminal. They’re also going to keep some of the terminal’s history alive, adding a little culture to complement the nature they plan to cultivate.

Really though, I think this is an awesome idea. One of the problems with cities is their impact on nature. Parks take up space, precious real estate that people want to capitalize on. “Building up” doesn’t work great with parks… but what about down? I hope these guys get the funding they need to make this underground park a reality. Let’s hear it for a little more nature!

What do you think, readers? Cool and innovative or impractical and silly?

It’s true. Human beings have now exchanged thoughts. What’s more, they did with 8,000 kilometers separating them. On one end, they read the brain activity of one person and transmitted it to the brain of the second person. The communication was very simple, and it had a small margin of error. This stuff may be small-scale, but it’s proof that it’s possible.

So the question is, is this where we’re headed? We can speak metaphorically about “living in the internet” and being cyborgs because we can’t put our phones down or leave our computers, but will we literally become cyborgs, with our computers in our heads?

Honestly, I find this terribly exciting, but I know I’m often an optimist about new technology. There are scary aspects to this kind of technology too. Are we also looking at the future of mind control?

So what do you think, readers? Where could this technology take us?

The mind of a writer works in weird and wonderful (but mostly just weird) ways. It’s not necessarily better, just frequently different. And it’s not that I believe mine (in particular) is entirely original either. Even so, it’s always a little eerie to come up with an idea for a story (wink wink), and then stumble across a story in the news or life that reveals how that “different” idea may come to pass in the not so distant future…

I speak of stumbling across these videos:
Computer Chips In Your Brain
Connecting The Mind To The Internet
(Sorry they’re links and not embedded. They were not embed friendly.)

But like I said, it’s not like I thought these were original ideas… I just didn’t think they were quite this close to becoming reality…

Fascinating stuff in science, guys. Where will we go next? I’m stoked to find out.