This is the mousetrap:

It actually wasn’t intended to catch the mouse. You see, it’s currently in a museum, the Museum of English Rural Life. Turns out that the mouse got in during construction for the redevelopment of the museum. They had other traps set, and yet THIS trap still managed to catch one.

Here is the mouse: 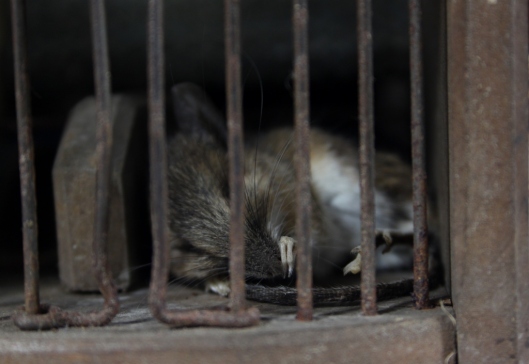 Here’s IFLS’s report:
Staff at the Museum of English Rural Life (MERL) opened their emails on Wednesday morning to find a rather odd message from a confused assistant curator, saying: “There appears to be a dead mouse in this mousetrap which is not described as being there on the database.”

Within the 150-year-old mousetrap, the curators did indeed find a fresh dead mouse. The museum has a wealth of textiles, straw and wood in its collection, but the unfortunate rodent happened to cross paths with the “old, not obsolete” mousetrap.

Adding further curiosity to the story, the trap was not baited with anything other than a layer of dust. The mousetrap is able to capture unwitting pests alive with a seesaw mechanism. As the mouse walks along an internal plank, the pest’s weight will tip the seesaw over, leaving it trapped in bottom of the box.

The contraption was patented and manufactured in 1861 by Colin Pullinger & Sons of Silsey, West Sussex. On the side of the box, it accurately boasts: “Perpetual Mouse Trap” and “will last a lifetime.”

But here’s what I think is the best part:

…the mouse remains in the trap while we decide what to do with it. One option is a dignified burial, another is to desiccate it or have it prepared to remain as a permanent feature of the mouse trap for our new displays. We’ll let you know what we decide.

You may have died, little mousey, but you get to become part of history! Yay!

So, readers, are you impressed by the mousetrap? Or just feeling sorry for this unlucky mouse?