So, snakes are pretty cool. But before I really knew anything about them, I heard people call them “slimy.” However, when I first met (and was able to touch) a snake, I found that their scales actually felt dry to the touch. I summarily dismissed sliminess as an insult by those who dislike snakes and moved on. Apparently I was a little too hasty.

Here’s the Secret to How Snakes Slither

Scientists have found a surprising explanation for snakes’ effortless slithering: A mind-bogglingly thin coat of fatty lubricant embedded on the snakes’ scales.

Thin really does mean thin. And snakes use this lubricant to keep from getting stuck on things as they drag their bodies along. This discovery points “the way toward new kinds of industrial lubricants and coatings, not to mention improved designs for snake-inspired robots.”

So why didn’t we know snakes really were slimy?

Unlike creatures such as snails, which smooth their path by secreting and leaving behind trails of wet lubricant, the snakes’ lubricant stays embedded on the scales themselves, forming a durable, slick layer similar to what keeps our joints lubricated and limber.
And since the snakes’ lubricant doesn’t wipe off, people handling snakes were none the wiser.

Once again, scientists are seeking to imitate nature’s advanced “technology” to get ahead.

Nature has figured it out over millions of years,” says Weidner. “We can try to understand its little secrets.

Check out the article linked at the top for more details. It’s pretty cool.

Essentially, scientists found that crocodiles can remain on watch even while they’re sleeping.

…they are able to undergo what’s known as unihemispheric sleep, where only one side of their brain shuts down for sleep at a time, while the other half remains active. Not only that, but they apparently do so while keeping one eye open to watch out for potential predators… or prey.

People always ask writers, “Where do you get your ideas?” The answer? Everywhere. Especially after reading an article like this. The animal kingdom is full of strange, cool, and sometimes terrifying abilities like this. The trick is farming and combining the bits and pieces into something new to present to the readership.

But seriously, how badass is this? It turns out that a bunch of animals can do this, including marine mammals like dolphins and sea lions. Dolphins can actually continue swimming while sleeping.
Check out the article if you want to know how scientists figured it out (it’s interesting).

No really. This blog is about bear poop.

So scientists in Norway want to know more about their bears, so they’re encouraging hikers to pick up bear poop and send it to them for analysis.

Don’t believe me? Check out this pamphlet.

In my experience, people don’t know much about bears. So here are some tips.

But I want a huuuuuuuug!

Don’t poke them with sticks, either.

But according to those crazy Norwegians, you should follow them around and collect their poop.

Seriously though, this information is important for conservation efforts, but if you happen to be roaming the Scandinavian countryside, pick up some poop and take it to the nearest poop-collection station.

…Or at least we haven’t bred as many deformities into them yet.

Cunning Cats Forced Dogs To Evolve… Or Go Extinct
IFLS wrote the above article, summarizing how when cats came to North America, their superior predatory skills forced the dogs already living there to either adapt and improve or go extinct. Both cats and dogs are powerful predators and exclusive carnivores, so in the wild, they’re in direct competition with one another. Scientists compare this extinction/adaptation result to be on par with what you see from drastic climate changes.

Nature has always done a pretty good job of keeping things balanced. Then, along came humans…
Dogs are their primary victims. I know lots of people like the various breeds, like pugs and bulldogs, but the truth it, they’re being bred into helplessness. We’re exaggerating traits for aesthetic effects (and frequently inbreeding them in the process), and this is having a detrimental effect on their health and well-being. Wanna see the worst of them?

Of course, cats have suffered from our tampering too…

Don’t get me started on those short-legged cats they’ve been breeding… Animals are beautiful the way they are. A little selective breeding is fine (great, even!) but when it causes health problems and other detrimental side effects? I disagree with that path.

What do you think, readers?

…has its playful, cuddly moments too.

Check out this bear going for a dip in some folks’ swimming pool and hot tub. Who says bears can’t enjoy the good life too?

I saw the first of these videos on a local website, and one link led to another… The second is my favorite, but the third could show you anything.

A leopard and cub cross the river:

Live footage of a water hole in South Africa:

Because who objects to starting their day with a few cute animal pictures?

A loaf of baby goat: 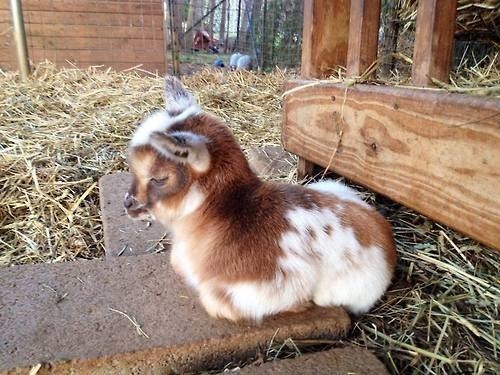 This is a baby geep: half-goat, half sheep.

^The above image is also linked to an article on geeps. 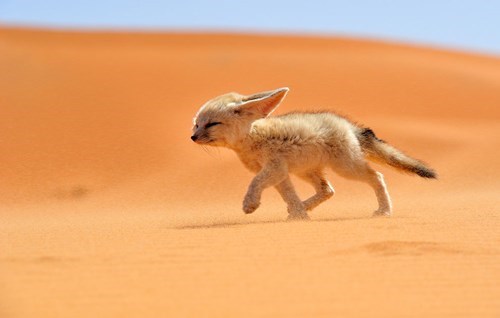 This owl has a ridiculous face:

This owl is enjoying his massage: 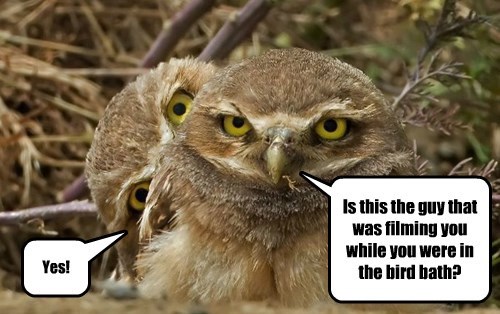 Not an owl. This bird makes cool laser noises though: