One of the first thing people ask me when I tell them I’m a writer is, “What do you write?”

I, of course, tell them that I write fantasy, but unfortunately, that doesn’t really narrow it down much. You see, there are many different kinds of fantasy. So after I say, “fantasy,” I get responses like these:

Well, kind of, because there are races of magical creatures and it’s a medieval setting and whatnot, but I don’t write epic fantasy, with the massive cast of characters (many of whom die) and all that. Also, in my fantasy, I like to have more magic than those.

Well, kind of, because I like to think I have a similar spirit of adventure and create a fun sense of awe for magic, but mine aren’t really intended to be children’s books, and the setting is not in modern times.

Or, “Oh, like [insert some author I’ve never heard of]”

And the thing is, I couldn’t think of a term to describe my kind of fantasy. “Heroic fantasy” is close, as is “fantasy-adventure,” but neither quite nailed it.
Then I heard about noblebright fantasy. It’s something of a new concept, and not a widely-known term (yet?), but I like it. A lot.

Noblebright fantasy centers around good characters who try to do good things for good reasons. Not everything is peachy and happy, but in the end, they’re able to make some kind of difference. There’s hope. There’s magic. It doesn’t have to be a children’s book; in fact, sometimes even a noblebright novel can be quite dark.

I feel like we need this label. If I know a story is noblebright, I know I don’t have to worry about reading yet another story where a good character can’t get ahead and just makes things worse until everything is awful and the characters are all so corrupt you can’t tell the good guys from the bad guys.

I like it better when fiction inspires us and brings hope. Life needs a little more noblebright.

If you’re curious to know more about noblebright, I set up a page about it here.

So what do you think, readers? Do you like the concept of noblebright? I know some people love the “gritty” and “grimdark” stories that are so popular today. Are you one of them? Share your thoughts in the comments!

Bored Panda had some amazing bumper stickers the other day. I’ve picked my favorites and divided them into categories for you:

For the passive-aggressive types:

Stickers for people tired of seeing “Baby on Board” signs:

Today I’m taking a break from the usual programming to ask for your help. Yes, you.

As you may know, I’m a pretty new author. I have two books out, and I self-publish. I put in the time and money to make sure I did it right, too, and the end result is two books that I’m very proud of. Unfortunately, most people have never heard of them.

So here’s what I’m asking. If you read my books and liked them, could you leave a review? You can leave it anywhere you like: the platform you bought the book from (like Amazon), or on other sites (like Goodreads). Reviews are SO important for new authors. When readers look at books, they want to know what it’s about, how much it costs, and how other people liked it. I can control the first two, but the last one is entirely up to you.

If you feel like sharing my books with your friends, that would be totally awesome too.

And if you’ve never read (or heard of) my books, please check them out. And The Wolves Danced is a free short story/teaser preceding my two novels, Calling On Fire and Fire Within. If you like fantasy, check them out!

And if you do check them out, or you do leave a review: thank you. It isn’t easy trying to make a go of it as a new author. Writing full time is my dream, and it’s one that you can help make happen.

The sequel to Calling On Fire is finally here!

Fire Within is now available! 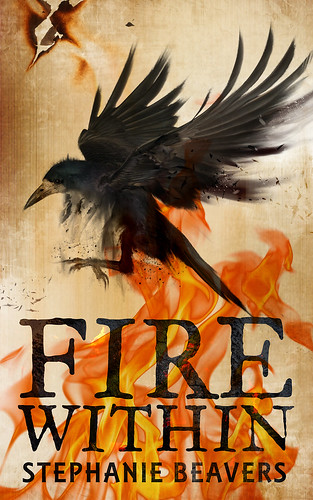 Two brothers with magical abilities must defeat the evil mage who seeks to annihilate them and everyone they’ve ever known.

For now, the novel is only available in ebook form, but I’m working hard to get it printed as well!

You can buy the ebook here:
Amazon.com | Amazon.ca | Smashwords
Multiple formats are available through Smashwords. Other retailers will become available as Smashwords distributes them.

Toman and Esset, the Animator and the Summoner, sacrificed everything in their battle against the evil mage Moloch, and they still failed.

Even so, they’re not willing to give up. Not that they have a choice: Moloch has fixated on inflicting suffering on those they love.

Tseka, a Nadran warrior, has thrown in her lot with theirs. Her race of snake-like people are once again at risk from the evil mage’s cruelty. She’s just not sure she has the strength to be more help than burden. Can Tseka keep up with the brothers, or will she end up a casualty of war?

Erizen, the mercurial mage, has joined their team as well. His knowledge and power are invaluable to Toman and Esset. The only problem: they can’t be sure they can trust him. Will Erizen fight at their side, or will he betray them before the end?

Toman and Esset have new allies and new abilities, but also new scars. Toman’s very soul is crippled. Esset’s new-found power is unpredictable at best and deadly at worst. And Moloch’s power has only grown in turn.

How can they hope to win when the most powerful mage in existence can now call upon the powers of death itself?

Thank you very much to Damonza.com for this amazing cover for my upcoming book!

Look forward to the novel soon!
If you haven’t yet, check out my first book, Calling On Fire, or my free short story, set before the events in Calling On Fire: And the Wolves Danced

Well, time for a general update. I am planning on getting the next book, Fire Within, published this year (the sooner the better!) Edits are underway, and I’m hoping this book will take far less time than the last.

That being said, it’s already looking like this year is going to bring a lot of life changes for me. Some changes will be good, many are unknown, and some are less desirable. Writing, working, and playing all need to be balanced for life to go on in a sustainable fashion. Such is true for all of us, and as much as I wish things were a little more stable, I know I’m still incredibly blessed. In the meantime, it’s back to hunting for that day job to pay the bills until my writing pays off.

Now, I’ve never been one much for New Year’s Resolutions. Not officially, anyways. Life is a constant journey towards self-betterment, and although the reminder (in the form of the new year) is nice, the whole thing has become a little too cliche for me. I have my goals and I work towards them. I don’t need a formal list. But what about you, dear readers? Do you do resolutions? I know some people really like them! Any big changes coming for you? Share in the comments!